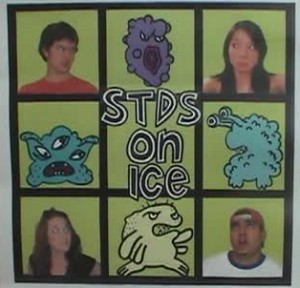 When I started college I never thought I would be asked to teach sex-ed to a bunch of my peers, I never expected that my work would require me to learn to ice skate, and I never thought for a moment that I would be in a rock opera with giant STDs.  Due an absurd idea I had late one night, these things all happened to me.  Strangely enough, this story is one of the many reasons I was able to finish my undergraduate studies debt free.

What is a Resident Advisor?

A resident advisor, also commonly called a resident assistant, is the upperclassman living in the dorm.  The resident advisor is tasked with keeping peace between roommates, making studying somewhat possible in the dorm, and ensuring the safety of students who are free from the supervision of mom and dad for the very first time in their lives.  In return for their efforts, resident advisors get free housing, meals, and a small stipend.  Becoming a resident advisor was perhaps the best decision I made as an undergraduate.

STDs On Ice: The Rock Opera

As part of our job as RAs, we were asked to come up with an idea to encourage our residents to be “sexually responsible”.  I thought that the idea of getting a bunch of college freshman to suddenly become abstinent was absurd.  I jokingly proposed to some of my friends that we do a play, the joke grew into a rock opera, and to make things really absurd, we decided it ought to be on ice.

About a week later, in a meeting with my boss, she brought up the idea.  Except to her, it wasn’t a joke.  In fact, she had already told her boss about the idea, and we were getting grant money to rent the Ohio State ice rink for a night.  Thus began my very short career in musical theatre.

I was fortunate to be a part of a team of very talented individuals.  The musically inclined people recorded music.  The creative ones drafted a script.  Those with theatre experience made the play happen.

My sarcasm helped give birth to this awesomely ridiculous creation:

Lessons from STD’s On Ice

Lesson number one is that crabs will make your crotch itch.  As time has passed, I’ve learned many other lessons from this experience.

Being an RA is a great way to help pay for college.  Not only was the job a ton of fun, but it was also very rewarding to help guide people at such an exciting time in their lives.  The fact that I lived rent-free was icing on the cake.

The people you work with have a huge influence over your quality of life.  This was the first job that I ever had where I was surrounded by people I genuinely enjoyed.  They also had a multitude of talents.  When work is fun it doesn’t feel like work at all.

A little bit of creativity is a good thing when it comes to financing your education.  As an engineering major with no artistic ability, a little bit of creativity helped me pay for my schooling.  One guy, through a serious of bartering, bought an entire house with just one red paperclip.  Scholarships, grants, and work-study are great, but there are so many more sources of income to tap into.  Millions are stuck with student loan debt, there is nothing wrong with being unconventional in avoiding it and paying it off.

You can take a lighthearted approach to having a serious discussion.  STDs are a very serious subject, and certainly not a joke.  Though we never took ourselves seriously, and the medium we used to convey the information was far from serious, the message we conveyed was serious.  Students may have laughed and had a good time, but to this day I believe that we also taught some valuable lessons.

These days, I spend much of my time educating people on the very serious subject of student loans.  Though a blog article about STDs on Ice may not be the most conventional or serious way of addressing the topic, it is my sincere hope to inspire people to get creative and perhaps even consider becoming an RA.

Were you able to make any money to lower the cost of your education?  What ways have you gotten creative to avoid or pay back student loans?