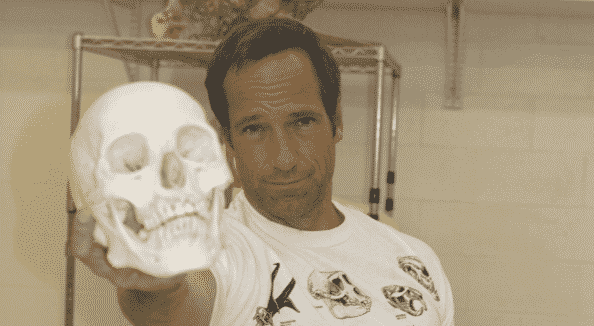 Editor’s Note: This article was originally published on January 6, 2014. It has been updated to include up to date job and salary figures.

Mike Rowe, most famous for his work on the Discovery Channel’s Dirty Jobs and Ford truck commercials, thinks that getting student loans for college is foolish. Rowe believes that students should be learning skilled trades, not going into debt for four year degrees.

He points to a poster that was in his high school guidance counselors office as the “Worst advice in this history of the world.” The poster, seen here, depicts an exhausted blue collar worker next to a recent grad proudly holding a diploma. The caption reads, “work smart, not hard”.

Rowe has started a foundation to fund scholarships to attend trade schools as well as a PR campaign encouraging the trade school option.

As Rowe said in one recent interview:

“We’re lending money we don’t have, to kids who will never be able to pay it back, for jobs that no longer exist.”

According to Rowe there are 3 million skilled jobs waiting to be filled, but employers are struggling to find the right people for the job.

Even though the advice to attend college probably isn’t the worst advice in the history of the world, Rowe has a point.

High schools are often evaluated on the percentage of kids that go on to attend college. The sentiment that a student learning a trade is somehow not living up to their potential is absurd.

There was a time when attending college set you apart from your peers and qualified you for many jobs that needed to be filled. Now it seems the pendulum has swung the other way. Having a college degree doesn’t mean employers will be fighting over you, and the degree may not pay for itself in the long run.

Learning a trade may not be as glorified in popular culture, but there is absolutely a need, and there will continue to be one for quite some time.

Just yesterday, my city received nearly a foot of snow.  Today it is -13 degrees with a wind chill 40 below. When the snow was pounding the city, my home lost power for several hours. If it wasn’t for the skilled tradesman who braved the elements, I would be in a potentially dangerous situation.

In addition to providing a valuable service to the community, the men and women working as line installers and repairers have great career prospects according to the US Department of Labor. The Bureau of Labor statistics estimates that these individuals make just over $70,000 per year on average. They also project great job opportunities for those in the field.

Obviously, I’m just reporting one example based upon my personal experience, but it illustrates the point that Rowe seems to be making. Not going to college does not make you a failure, in fact, it may be the wisest decision.