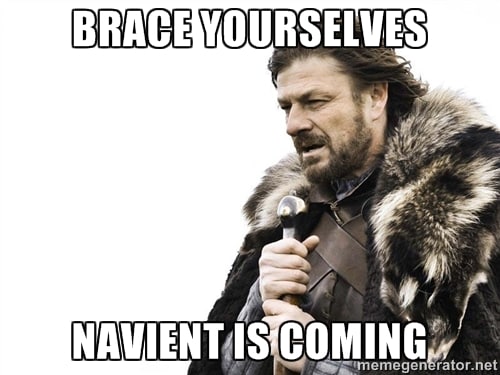 Months ago we warned you, but this week it becomes a reality.  Sallie Mae’s latest creation, Navient, comes to life.

Today’s focus will shift to dealing with this new company and what borrowers can expect.  Sallie Mae has made it clear to borrowers that the services they currently receive will not be changing.  However, Navient is an entirely new company and they can behave as they see fin.  The good news for borrowers is that the contracts (aka the terms of the loans) remain in full effect.  A company re-branding, splitting, or selling off the loans cannot alter the terms of the agreement as originally agreed upon.

This means that Navient can’t suddenly double the interest rate of your loans or take any other similar measures not permitted by the terms of the loan.

The downside here is that if Sallie Mae was providing a service or perk not specifically mentioned in the loan terms, Navient will be under no obligation to continue to follow.

The best example here would be something like the rate reduction plan.  Currently, Sallie Mae assists borrowers who have fallen behind on their loans by lowering the interest rates on a temporary basis.  This does not appear to be a term of the loan, but rather a program Sallie Mae has initiated to help borrowers catch up on their debt.  Or from Sallie Mae’s perspective, a way to get people to start making payments who had previously given up.

It is conceivable that Navient will not have such a program, just as Sallie Mae technically had the right to stop enrolling new people at any time it felt inclined.  This is because there is seemingly no legal obligation on their part.  However, this change would seem to contradict Sallie Mae’s assurances that things will not be changing.  Even the phone number is staying the same.

Even though Navient is an entirely new company, it will be run by the same people who ran Sallie Mae, so there is plenty of reason to believe things will stay exactly the same.  Whether or not this is good news, depends entirely upon your opinion of Sallie Mae.

To end on a positive note, there may be some reason for optimism.  It should be no surprise to anyone that Sallie Mae’s public image is pretty tarnished.  One of the reasons that they created Navient may have been for a fresh start.  For optimistic borrowers who have had issues in the past with Sallie Mae, perhaps this can be a new start.

For now, all we can do is watch very closely.